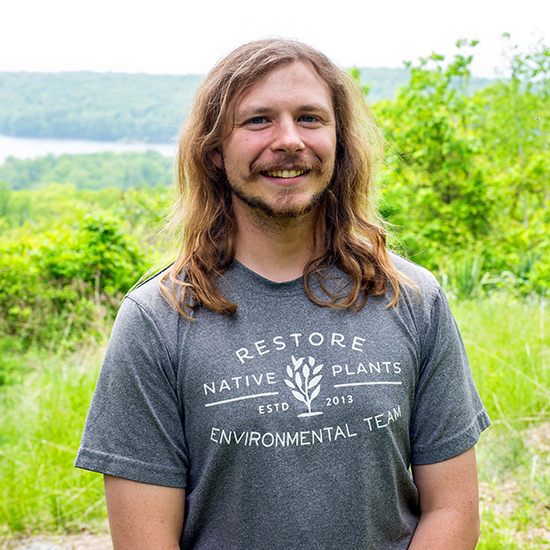 Matt graduated Cum laude from William Paterson University where he earned a communications degree with a concentration on media production. A few years after college he made a switch in his career to focus on becoming more involved in the restoration and preservation of the environment. In 2015, Matt first became involved in conservation by serving an AmeriCorps term with the New York-New Jersey Trail Conference. During this time, Matt helped build a hiking trail from scratch that utilized dry stone masonry techniques that connected to the Appalachian Trail in Fahnestock State Park. After this field season, he was hired as an Assistant Invasive Species Program Coordinator to Dr. Linda Rohleder. It was during this role that Matt became awakened to his passion and love for our green spaces and wanted to protect and restore our local habitats. With the help of Linda, he educated himself about the harmful effects invasive species pose on our environment and became captivated with this program.

In the 2016 field season, Matt became a member of the Invasive Strike Force (ISF) crew with the NY-NJ Trail Conference by serving a 2nd AmeriCorps term. He learned treatment and removal techniques for the control of invasive plant species. After the season, Matt was hired as a Programs Assistant and interim Volunteer Coordinator with the Trail Conference to direct volunteers in an area of their interest. Matt joined the ISF crew again in 2017 and focused on engaging and educating volunteers about invasive species and hands on control techniques. Matt received his professional commercial pesticide applicators license from the Department of Environmental Protection in the Forest category. He is also certified in Wilderness First Aid and CPR/AED through the American Red Cross.

Having 2 years of invasive species knowledge and able to manage volunteers on, and off trail, Matt accepted a position with Restore Native Plants as their Terrestrial Invasive Species Team Leader. He hopes to help build this program into something great, where others will be able to share his passion for environmental restoration. Matt enjoys working outdoors, traveling, hiking tall mountains, rock climbing, and is a thrill seeker that likes anything dangerous. He is always excited to learn new things and is looking forward to bringing back our backyards. Since joining RNP, Matt has led the removal of over 596,305 invasive plants, saving over 1,396 native trees!